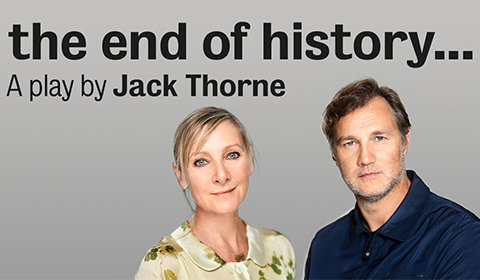 The End of History... tickets

Royal Court Theatre
14 seat views
One of Britain’s modern greats, Jack Thorne returns to the Royal Court for the third time after the successes of Hope and Let the Right One In with his latest original play, late 1990s family drama the end of history…

The play follows Sal and David, a couple who would much rather their three kids ate up their leftist ideals and welfarism than any fancy dinner. All the same, Sal is attempting to cook for them as the couple have finally managed to lure their brood back home for the weekend. Eldest Carl is introducing his new girlfriend to the family for the first time; middle daughter Polly is back from Cambridge University; and youngest Tom just needs to be out of detention in time for dinner.

Award-winning performers David Morrissey and Lesley Sharpe head up the cast of Jack Thorne’s latest offering. Morrissey will be familiar to many television viewers from his roles in Inside No.9, The Walking Dead and Doctor Who, and to theatregoers from Three Days of Rain, Much Ado About Nothing and several RSC shows. Sharpe’s West End credits include The Seagull, Little Voice and Ghosts, and her critically-acclaimed television performances include those in Afterlife and Bob & Rose.

Joining them in the end of history… are Zoe Boyle (Six Degrees of Separation), Laurie Davidson (The Ferryman), Kate O’Flynn (The Glass Menagerie) and Sam Swainsbury (The Twilight Zone).

Writer Jack Thorne and director John Tiffany have previously collaborated at the Royal Court on Hope and Let the Right One In. Their most highly celebrated collaboration, however, has been Harry Potter & the Cursed Child, the West End production of which was awarded a record-breaking nine Olivier Awards in 2017, and whose Broadway transfer received six Tony awards.

A family drama with Thorne’s recognisable political undertones, the end of history... runs at the Royal Court from 27 June until 10 August 2019.

Special notice: Any fans of writer Jack Thorne or celebrated leads David Morrissey and Lesley Sharpe definitely won’t want to miss this new production, nor will those who have seen Harry Potter & the Cursed Child and are curious to see a different side of the award-winning creative collaboration of Thorne and Tiffany.

The End of History... seat view photos show what view you will get for your money. Unfortunately we do not have any seat views for this show.