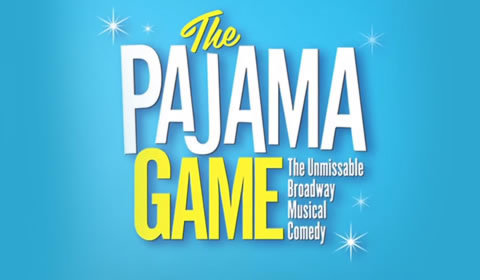 First performed in 1954, The Pajama Game is based on Richard Bissell’s novel 7 ½ Cents, a cutting satire about American labour conditions of the time. Adapted for the stage, with music and lyrics by Richard Adler and Jerry Ross, The Pajama Game is a blissfully romantic comedy, following the handsome Superintendent Sid Sorokin who falls for union rep Babe Williams. But when the workers are denied a pay rise, the two find themselves hilariously at odds. Will Sid and Babe’s love be enough to bridge the gap? Featuring a classic score including “Hey There”, “Once-A-Year Day” and “Hernando’s Hideaway”, The Pajama Game is the joyous musical set to take the West End by storm.

Olivier-nominated actor Michael Xavier stars as Sid Sorokin, opposite Joanna Riding as Babe Williams. Xavier is best-known for his acclaimed performance in Into the Woods, whilst Riding has appeared in countless musicals including Carousel, My Fair Lady, Guys and Dolls and A Little Night Music. Further casting includes Peter Polycarpou as Vernon Hines and Colin Stinton as Hasler.

Directed by Richard Eyre (Mary Poppins, Guys and Dolls), The Pajama Game features choreography by Stephen Mear, design by Tim Hatle, lighting design by Howard Harrison, sound design by Paul Groothuis and fight direction from Paul Benzing. A commercial and critical success stuffed with slapstick comedy and a breezy score, The Pajama Game received the 1955 Tony Award for Best Musical. Opening at the Shaftesbury Theatre, this beloved musical is playing for a limited time only!

Special notice: Fans of traditional musicals will love this revival of a 1950’s production, which includes some classic songs.

Sorry this show closed 13 September 2014, we recommend these similar productions.

SeatPlan Recommends: Seats in the Shaftesbury Theatre offer generally good views. Be aware that seats toward the rear of the Royal Circle have an extremely restricted view due to the overhang of the Grand Circle. Sit in the front of the Royal Circle for the best overall view of the stage.

You can't beat a Chichester Festival musical! This charming production used very clever use of the set... More

You can't beat a Chichester Festival musical! This charming production used very clever use of the set to move scenery on/off stage with motorised wheels in the base of the set. The choreography and costumes were very traditional.

samhaydenharler 31 Mar 2017
Your basket is empty.