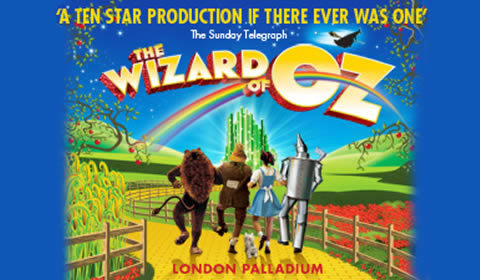 The Wizard Of Oz tickets

London Palladium
5 seat views
Based on the 1900 novel by L. Frank Baum and the beloved 1939 film starring Judy Garland, Andrew Lloyd Webber revives The Wizard of Oz at the London Palladium.

The hugely successful BBC television show Over the Rainbow saw Andrew Lloyd Webber begin a nationwide search for a budding young star to play Dorothy. Luckily the maestro discovered two, with winner Danielle Hope playing Dorothy and runner up Sophie Evans acting as alternate Dorothy for one show per week.

The Wizard of Oz tells the tale of a young girl who is bored of her life living on a farm with her aunt and uncle. Dorothy, along with her beloved dog, Toto, dreams of a life somewhere over the rainbow, way up high. When a freak cyclone transports her and her four-legged friend to the colourful place she has always dreamed of, she gets more than she bargained for when her house accidentally flattens the Wicked Witch of the East. Inheriting her magical Ruby Red Slippers, Dorothy must avoid the vengeful Wicked Witch of the West who is hot on her heels. All Dorothy wants to do is return home, but she must first convince the mysterious and aloof Wizard of Oz to send her back.

Lloyd Webber revives a number of original songs from the film such as ‘We’re Off to See the Wizard’ and the timeless ‘Somewhere Over the Rainbow’. On top of the original score, Webber adds new music, with lyrics by Sir Tim Rice, including stand-out numbers such as ‘Red Shoes Blues’ and ‘Already Home’. Directed by Jeremy Sams and choreographed by Arlene Phillips, The Wizard of Oz earned itself an Olivier Award nomination for Best Musical Revival.

Special notice: The Wizard of Oz is a family show for ages five and up, however some moments can be a little bit scary for younger audience members. Please note that the London Palladium will not admit children under the age of 3. Sit back, relax, and watch the magic of Oz unfold before your eyes.

Sorry this show closed 02 September 2012, we recommend these similar productions.

SeatPlan Recommends: To catch a good glimpse of those all-important ruby slippers, the best seats are situated in the Dress Circle. Avoid the Stalls rows A-D if you or a member of your party is under 5ft as they will be unlikely to see the magic shoes on stage throughout large parts of the show.