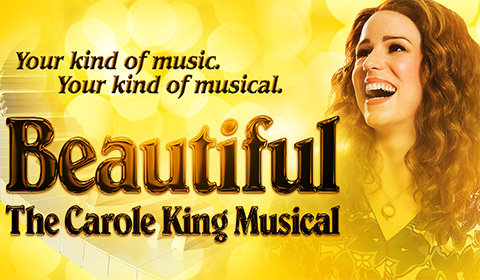 Stephen Sondheim Theatre
30 seat views
Since opening on Broadway in 2014, Beautiful: The Carole King Musical has charmed audiences and critics alike, winning the Grammy Award for Best Musical Theater Album. Following singer-songwriter Carole King’s remarkable journey from a teenager with a dream to an inductee of the Rock & Roll Hall of Fame, this thrilling musical plays at the Stephen Sondheim Theatre.

Beautiful documents the story behind some of pop culture’s biggest hits. From “You’ve Got a Friend” to “Natural Woman”, Carole King’s music has been the soundtrack to every decade since the 60s. She wrote her first hit, “Will You Still Love Me Tomorrow?” at just 17, with long-time partner Gerry Goffin. The musical delves into the woman behind the success, as she transforms from a shy girl from Brooklyn to a powerful collaborative artist whose songs have been recorded by over 1,000 musicians.

From June 27 to September 1, Grammy Award winning singer-songwriter Vanessa Carlton will make her Broadway debut as Carole King.. She is joined by Evan Todd (Heathers the musical) as Gerry Goffin, Kara Lindsay (Wicked, Newsies) as Cynthia Weil, and Ben Jacoby (The Phantom of the Opera) as Barry Mann.

Following her life and career from first hit to the chart-topping solo album Tapestry in 1971, Beautiful: The Carole King Musical at the Stephen Sondheim Theatre is a joyous celebration of one of music’s biggest legends.

Special notice: Fans of pop music from the 1960s to today will definitely want to grab tickets for Beautiful: The Carole King Musical on Broadway. With plenty of well-loved songs and an entertaining story that takes us behind the scenes of the music industry, this jukebox musical is also a great option for those wanting a fun night out at the theater.

Beautiful seat view photos show what view you will get for your money. Unfortunately we do not have any seat views for this show.