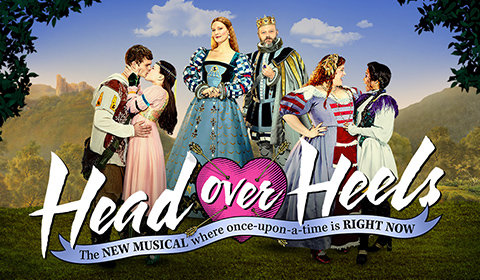 Hudson Theatre
11 seat views
The smash-hit songs of 80s girl group The Go-Go’s add to the vivacious fervor of Head Over Heels, a laugh-out-loud musical comedy playing at the Hudson Theatre. A celebration of diversity and love in all its forms.

Head Over Heels mixes its pop soundtrack with storybook Elizabethan set & dialogue and a story set in ancient Greece. The result is just as surreal and campy as it sounds, in the best possible sense.

A loose (to put it mildly) adaptation of the Elizabethan prose classic Arcadia by Sir Philip Sidney, the book is adapted by James Magruder (Triumph of Love) from an original by Jeff Whitty (best known for Avenue Q). It tells the tale of a royal family who, after receiving a prophecy of doom from the Oracle of Delphi (played by Peppermint of RuPaul’s Drag Race fame), set off on an adventure full of larger-than-life characters and saucy encounters.

The brash and sassy cast includes Jeremy Kushnier (Jersey Boys) and Rachel York (Disaster!) as the frustrated royal couple. Their stubborn daughter Pamela, played by Bonnie Milligan in an incredible Broadway debut, refuses to be wed, while their other daughter, Philoclea, played by Alexandra Socha (Brighton Beach Memoirs) is pursued by shepherd Musidorus – a frantically hilarious comic performance from Andrew Durand (War Horse).

Taboo-breaking, uplifting and sexually-charged, with a diverse cast in every aspect; size, gender, race, Head Over Heels is a show to be celebrated, and it’s lifting the roof off the Hudson Theatre!

Special notice: A must-see for fans of The Go-Go’s and their lead singer Belinda Carlisle, as well as saucy humour, rambunctious musicals and anyone who wants to see a bit more diversity on the stage.

Sorry this show closed 06 January 2019, we recommend these similar productions.

Head Over Heels seat view photos show what view you will get for your money. Unfortunately we do not have any seat views for this show.