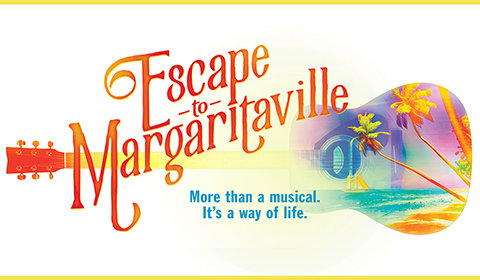 Marquis Theatre
0 seat views
Celebrated musician Jimmy Buffett lends his songs to Escape to Margaritaville on Broadway. Throwing together a charming bartender and a career-minded tourist in a beautiful island setting, audiences will be swept away by this lovable new musical at the Marquis Theatre.

Bartender Tully lives the high life: working on a paradise island resort, spending his downtime as a musician, and flirting with tourists who pass through. Rachel is a single-minded career woman accompanying her best friend on a pre-wedding escape. Two diametrically opposed souls thrust together in the height of a tropical summer… when the drinks are flowing and the sun is shining, anything could happen – and this chalk-and-cheese pair may find more in common than they thought.

Paul Alexander Nolan stars as Tully, with previous credits including a Drama Desk nominated turn in Bright Star and Doctor Zhivago at the Broadway Theatre. He is joined by Alison Luff as Rachel. Luff has appeared on Broadway in Matilda the Musical and Les Misérables and Ghost the Musical. Other cast members include Lisa Howard (9 to 5) and Eric Petersen (School of Rock the Musical).

With music and lyrics from “Come Monday” hitmaker Jimmy Buffett, Escape to Margaritaville is inspired by his island escapism aesthetic and named after the chart-topping song “Margaritaville”. It features a book by Greg Garcia, who won an Emmy Award for My Name Is Earl, and Mike O’Malley (Glee). Come From Away director Christopher Ashley joins the creative team, alongside choreographer Kelly Devine (Doctor Zhivago).

Soak up the sun, cocktails and romance of the Caribbean; Escape to Margaritaville at the Marquis Theatre is a refreshing new jukebox musical sure to brighten up your day.

Special notice: Fans of Jimmy Buffett will love this new musical set to his greatest hits. With its summer vibes and classic “opposites attract” love story, Escape to Margaritaville is also perfect for anyone wanting an easy-going night at the theater.

Sorry this show closed 01 July 2018, we recommend these similar productions.

Escape to Margaritaville seat view photos show what view you will get for your money. Unfortunately we do not have any seat views for this show.