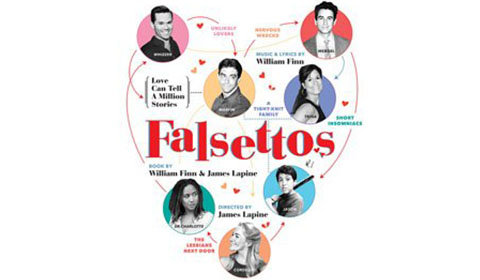 Walter Kerr Theatre
0 seat views
Two-time Tony Award winner Falsettos returns to Broadway this year, re-introducing audiences to Marvin and his unconventional extended family. With plenty to say about love and life against the backdrop of the AIDs crisis, the musical is set to open at the Walter Kerr Theatre.

It’s the end of the 1970s in New York City, and Marvin is struggling to keep all his relationships in line. He’s left his wife Trina for boyfriend Whizzer, and his son Jason is caught in the middle. Throw in psychologist Mendel and neighbors Cordelia and Charlotte, and life is starting to feel complicated.

Featuring songs including “Four Jews in a Room Bitching” and “Father to Son”, Falsettos is completely enthralling even as it reaches its heart-breaking conclusion.

This new revival stars Christian Borle as Marvin. Borle most recently gave his best Shakespeare as the Bard himself in Something Rotten!. The cast also includes Stephanie J. Block (9 to 5; The Mystery of Edwin Drood) as Trina, Andrew Rannells (The Book of Mormon) as Whizzer, and Brandon Uranowitz (An American in Paris) as Mendel.

Falsettos at the Walter Kerr Theatre is produced by Jordan Roth, President of Jujamcyn Theaters. The revival features direction from James Lapine, who co-wrote the book alongside William Finn. Finn also provides music and lyrics for the show.

Lapine and Finn are long-time collaborators, with their most recent effort, an adaptation of Little Miss Sunshine, opening to great acclaim Off-Broadway in 2013.

With a ground-breaking exploration of family and friendship at the height of the AIDs crisis, Falsettos is a satirical, funny and poignant account of 1980s America. Catch the second Broadway run of this cult favorite at the Walter Kerr Theatre from September 29 2016.

Special notice: Any fans of recent Off-Broadway hit Little Miss Sunshine will find a similarly heart-warming musical in Falsettos. A winner of Best Original Score and Best Book of a Musical, this is a second chance to secure tickets to a real gem of a show.

Falsettos seat view photos show what view you will get for your money. Unfortunately we do not have any seat views for this show.