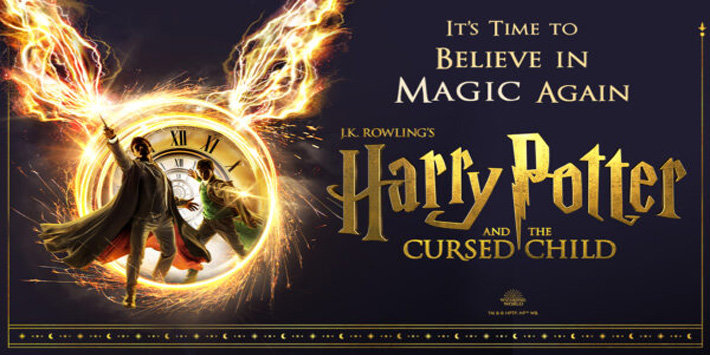 Lyric Theatre
118 seat views
After selling out within days at London’s Palace Theatre and winning a record-breaking nine Olivier Awards including Best New Play, Harry Potter and the Cursed Child transferred to Broadway in 2018, where it picked up six Tony Awards. A sequel to the seventh book, the play reunited audiences with Harry and his friends 19 years later.

The play returns to Harry as a husband and father of three with an overworked job at the Ministry of Magic. Meanwhile, his youngest son Albus Severus is about to start at Hogwarts amidst fears of being Sorted into Slytherin and disappointing his family. As father and son struggle under the weight of legacy and obligation, ominous ghosts of the past emerge and both come to learn that sometimes, darkness comes from the most unexpected places.

The current Broadway cast includes James Snyder (If/Then) as Harry Potter – the first American actor to take on the role. Nicholas Podany joins him as Albus Potter, with further casting including Matt Mueller as Ron Weasley and Jenny Jules (The Crucible) as Hermione Granger.

Harry Potter and the Cursed Child is directed by John Tiffany, whose prolific career includes the multi-award winning Once on the West End and Broadway. The play has been developed by scriptwriter Jack Thorne (Let the Right One In) from an original story he penned with Tiffany and J.K Rowling. Bringing the show to life are illusions and magic by Jamie Harrison (Charlie and the Chocolate Factory), set design by Christie Jones and an original score by Imogen Heap.

Harry Potter and the Cursed Child at the Lyric Theatre is one of the most popular shows on Broadway, and with a campaign to #KeepTheSecret, audiences are sure to have an unexpected and utterly magical time watching a brand-new wizarding adventure.

Harry Potter and the Cursed Child seat view photos show what view you will get for your money. Our users will start adding seat views when the show opens.

Earn double Rewards points by adding your Harry Potter and the Cursed Child seat view photo! Use your points for Theatre Tokens and Encore Tickets vouchers and get money off your next theatre trip.