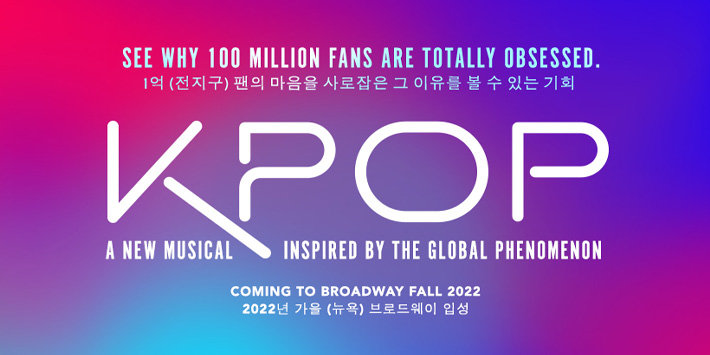 Enter the high-stakes world of global superstars in Broadway’s exhilarating new musical, KPOP Offering you a backstage pass to all the drama, the show is ready to earn its fandom at Circle in the Square.

A group of megastars put it all on the line for one night only, and a singer grapples with a secret that could bring a powerful label to its knees. With irresistible beats and sharp choreography, the KPOP musical is an intoxicating multimedia experience about the discipline, talent and commercial savvy that’s made K-pop a worldwide success.

KPOP on Broadway stars K-pop star Luna. She has also starred in Korean versions of the Legally Blonde musical and Mamma Mia!.

KPOP premiered Off-Broadway in 2017, and was nominated for Drama Desk, Drama League and Lucille Lortel Awards. It has a book by Jason Kim, music and lyrics by Helen Park and Max Vernon, choreography by Jennifer Weber, and costume design by Clint Ramos and Sophia Choi. Teddy Bergman directs.

Find out why 100 millions fans are obsessed with KPOP Broadway tickets. This high-energy, fist-pumping show will completely immerse you in the global phenomenon.

Sorry this show closed 11 December 2022, we recommend these similar productions.

KPOP seat view photos show what view you will get for your money. Unfortunately we do not have any seat views for this show.

K-Pop was a ton of fun. It is a bit campy, but that was the fun of it. Everyone was super talen... More

K-Pop was a ton of fun. It is a bit campy, but that was the fun of it. Everyone was super talented and although the plot is thin, the dancing and energy make up for it. I didn’t think I’d enjoy it as much as I did, but if you now what you are walking in to, you shouldn’t be disappointed.

For fans of the genre looking to see an amazing concert-like experience, I would definitely recom... More

For fans of the genre looking to see an amazing concert-like experience, I would definitely recommend. The last twenty minutes are show-stopping. The plot is extremely thin, and is dropped pretty much by the middle of the second act. The main star, Luna, is phenomenal, and the boy band brings a lot of the humor and levity, as well as amazing choreography. A bit disappointed with the girl group- some of them seemed to be phoning it in, and there were several instances where one of them was noticeably flat. It's a fun, energetic show- the crowd tends to get a little rowdy during the numbers, which was fine, but some audience members thought it was okay to interject and yell during the show. It's not the level of respect you're used to if you see a lot of Broadway. Overall, I would say it's an entertaining show, but not particularly great.

The show was phenomenal and something I had never seen before. This show closed too early.

One of the most fun shows I've ever seen on a Broadway stage! The vocals and choreography are ste... More

One of the most fun shows I've ever seen on a Broadway stage! The vocals and choreography are stellar and the costumes are amazing!