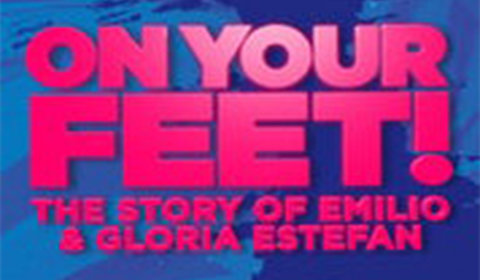 On Your Feet! Tickets

Marquis Theatre
0 seat views
Jukebox musical On Your Feet! will have audiences dancing in the aisles when it runs on Broadway. Based on the true story of Grammy Award-winners Gloria and Emilio Estefan, the show plays at the Marquis Theatre.

Charting their rise from a childhood in Cuba and stint on the streets of Miami, On Your Feet! is a thrilling look at the trials, triumphs and love behind this duo’s skyrocketing fame. Featuring music from their back catalogue, the show is set to chart-topping hits including “Rhythm is Gonna Get You”, “Get on Your Feet” and “Dr. Beat”.

Gloria and Emilio Estefan are one of the most successful Latin crossover artists in history, boasting a combined 26 Grammy Awards to their names. Their group, Miami Sound Machine, shot to superstardom with “Conga” in 1985 and became a mainstay of the Billboard Hot 100 for years after.

The original Broadway cast for On Your Feet! at the Marquis Theatre includes Ana Villafañe (Los Americans) as Gloria and Josh Segarra (Dogfight) as Emilio.

Featuring music and lyrics from the Estefans, the show’s book is written by Alexander Dinelaris, an Academy Award and Golden Globe winner for Birdman. Seasoned Broadway regular Jerry Mitchell directs, having previously won a Tony Award for his choreography on Kinky Boots. Other creatives include choreographer Sergio Trujillo.

An exhilarating, feel-good musical that combines a classic rags-to-riches fable with toe-tapping music, On Your Feet! is described by critics as “infectiously fun with genuine heart” (The Associated Press). It runs at the Marquis Theatre with opening night on November 5 2015.

Special notice: Anyone who’s danced to “Conga” or “Dr. Beat” will love this high-octane tribute to the Estefans, which offers insight into the people behind the hits. It's also a fresh new addition to the jukebox musical scene on Broadway, perfect for any fans of the sub-genre.

Sorry this show closed 20 August 2017, we recommend these similar productions.

On Your Feet! seat view photos show what view you will get for your money. Unfortunately we do not have any seat views for this show.