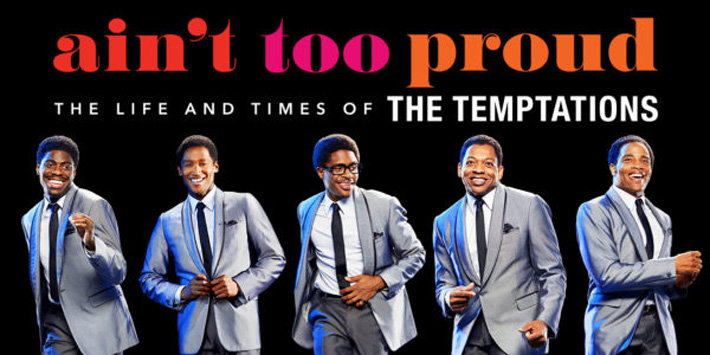 Imperial Theatre
33 seat views
After thrilling audiences at Berkeley Rep and The Kennedy Center, electrifying new jukebox musical Ain’t Too Proud – The Life and Times of The Temptations opens in New York. Following The Temptations’ incredible journey from their early days in Detroit to finding their place in the Rock & Roll Hall of Fame, Ain’t Too Proud is sure to get toes tapping at the Imperial Theatre.

Ain’t Too Proud documents the story behind The Temptations’ chart-topping hits – including “My Girl” and “Papa Was a Rolling Stone” - covering the group’s formation, their dizzying rise to fame, and the personal and political pressures which shook their friendship during years of civil unrest in the United States. This story of brotherhood, loyalty and betrayal dances to the beat of the group’s signature harmonies, with a soundtrack including just some of their 14 number one songs.

Nik Walker (Hamilton), James Harkness (Beautiful: The Carole King Musical), Jawan M. Jackson (Motown The Musical), Jelani Remy (The Lion King) and Matt Manuel (Motown the Musical) play The Temptations. The quintet has performed together since the show’s run at The Kennedy Center, with Baskin, Harkness, Pope and Sykes originating their roles at the Berkeley Rep. They are joined by a cast that includes Saint Aubyn, Taylor Symone Jackson and Shawn Bowers.

A thrilling story of family and loyalty set to some of the most iconic music in American history, Ain’t Too Proud is booking now at the Imperial Theatre.

Ain't Too Proud seat view photos show what view you will get for your money. Unfortunately we do not have any seat views for this show.