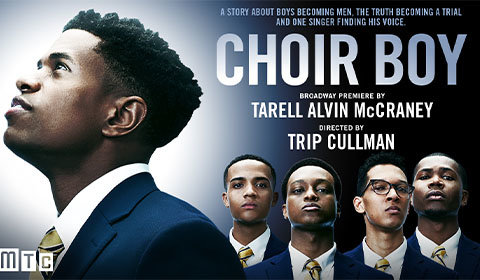 The Charles R. Drew Prep School for Boys has produced cohort after cohort of well-educated and ethical black men for 50 years. Amongst the current crop, gifted singer and devout Christian Pharus is a young man living life to his own beat. But as he carves a unique path through the school halls and ignores the homophobic jibes of his peers, can his dreams of taking a deserved place as leader of the school’s gospel choir become a reality?

Jeremy Pope stars as Pharus in his Broadway debut, having previously played the role at Alliance Theatre and Geffen Playhouse (2014). His other credits include Ain’t Too Proud at Berkeley Repertory Theatre and The View UpStairs at the Lynne Redgrave Theater.

He is joined by a cast including Chuck Cooper (The Life), Nicholas L. Ashe and Austin Pendleton.

Choir Boy is directed by Trip Cullman (Lobby Hero) with choreography from Camille A. Brown (Once On This Island), musical direction from Jason Michael Webb (The Color Purple) and set design from David Zinn (The Boys in the Band).

A heartfelt and unique account of a young man’s path to adulthood, Choir Boy on Broadway begins previews from December 12 2018.

Special notice: Anyone who was moved by the exceptional, Academy Award winning Moonlight should secure tickets to this second offering from playwright Tarell Alvin McCraney.

Choir Boy seat view photos show what view you will get for your money. Unfortunately we do not have any seat views for this show.