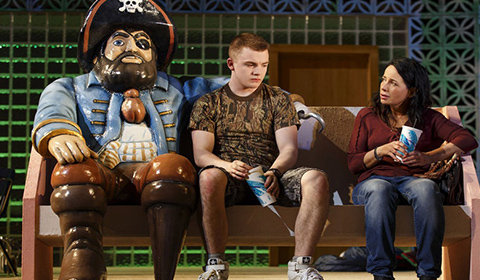 Lee (Janeane Garofalo) is a struggling single mother whose son Hank (Jack DiFalco) is institutionalised for burning down the family home. Her estranged sister Bessie (Lili Taylor) selflessly takes care of their elderly father and eccentric aunt Ruth (Celia Weston). When Bessie is diagnosed with Leukemia, the disease that killed their mother, she must reunite with Lee in the hope that she will be a suitable bone marrow donor.

The three women at the heart of the play are wonderfully portrayed. Janeane Garofalo (the well-loved comedy actress from films such as Dogma and Mystery Men) makes a strong Broadway debut, playing Lee with nuance and complexity. Lili Taylor (Dead Eye Boy) accurately and sensitively depicts the conflicted emotions of a woman just diagnosed with a terrible illness. Celia Weston (The Last Night of Ballyhoo) is delightfully ditzy and shambling as Ruth.

While the subject matter is heavy, director Anne Kauffman (You Got Older) does not forget that Marvin’s Room is a comedy – and makes sure the production is still loaded with heart and humour.

Special notice: Lovers of American theatre that mixes black comedy with believable family drama, such as Steel Magnolias. Additionally, fans of Janeane Garofalo will not want to miss her Broadway debut.

Marvin's Room seat view photos show what view you will get for your money. Unfortunately we do not have any seat views for this show.