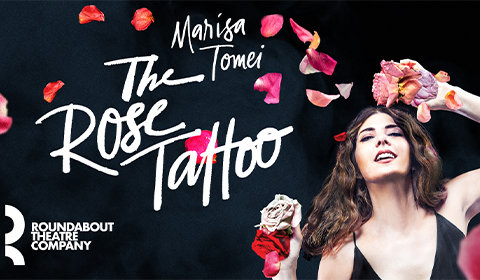 Set in the heat of New Orleans, The Rose Tattoo centers on widow Serafina and her daughter Rosa. Having lost her husband years before, Serafina is drawn out of solitude when trucker Alvaro arrives at her door. What follows is an affair of hot-blooded passion and a powerful story about rediscovering life and love.

Tomei and director Trip Cullman first staged The Rose Tattoo in 2016 at Williamstown Theatre Festival, where it received overwhelmingly positive reviews. The play was last seen on Broadway in a 1995 revival starring Mercedes Ruehl and Anthony LaPaglia.

Marisa Tomei is a three-time Academy Award nominee, winning in 1992 for My Cousin Vinny. She previously acted on Broadway in Oscar Wilde’s Salomé (2003) and Caryl Churchill’s Top Girls, and currently stars as Aunt May in Marvel’s Spider-Man movies.

The cast also includes Emun Elliott (Young Vic: A View From the Bridge; HBO's Game of Thrones), Cassie Beck (The Humans), Alexander Bello (All My Sons) and Tina Benko (The Crucible).

Director Tripp Cullman won Outstanding Director of a Play at the 2011 Drama Desk Awards for A Small Fire. His previous credits include Some Men at Second Stage and The Wooden Breeks at MCC Theater.

With a powerful central performance, this lesser-known treat from Tennessee William’s back catalogue is sure to heat up Broadway. Catch The Rose Tattoo at the American Airlines Theatre from September 19 2019.

Special notice: Fans of classic American playwrights should snap up tickets for this rarely performed Tennessee Williams offering, whilst anyone wanting to tick off another award-winning actor from their bucket list will find none better than Marisa Tomei.

The Rose Tattoo seat view photos show what view you will get for your money. Unfortunately we do not have any seat views for this show.