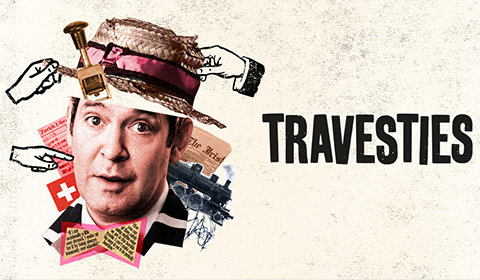 Set in Zürich, Switzerland during the first World War, Travesties is told through the somewhat distorted memory of English civil servant Henry Carr (Tom Hollander) as he reminisces about his interactions with dadaist artist Tristan Tzara (Seth Numrich), Irish novelist James Joyce (Peter McDonald) and Russian revolutionary Lenin (Dan Butler). These encounters are affected and flavoured by a production of Oscar Wilde’s The Importance of Being Ernest that Carr was starring in at the time.

If it sounds zany, that’s only because it is; however, Tom Stoppard’s reputation for intellectual comedies is justified in this highly literate; using clever word-play and many cultural and historical references to present ideas on politics, art, society and love.

Tom Hollander (co-creator and star of BBC sitcom Rev.) was a hit with London critics in the role of Henry, with his performance earning him an Olivier Award nomination. Seth Numrich (Warhorse, Golden Boy) is flamboyant and eloquent as Tzara, while Dan Butler (Warhol/Capote) is a fiery and bombastic Lenin.

Patrick Marber (writer and director of Closer) brings a frenetic pace to Travesties that ensures it doesn’t become bogged down in its own intellectualism. The witty dialogue and farcical situations zip along in order to keep the laughs coming.

Special notice: People who like to laugh and think will find ample opportunity to do both in Travesties, while dedicated Stoppard fans will not want to miss this elaborate, lavish and superbly directed production of one of his most surreal comedies.

Travesties seat view photos show what view you will get for your money. Unfortunately we do not have any seat views for this show.