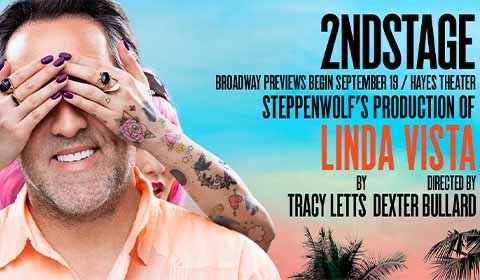 Wheeler has officially reached middle age. With 50 years, a divorce, and a lacklustre job to his name, things have to change. He moves out of his ex-wife’s garage into a place of his own, ready to embrace a new start… but things aren’t that simple. As he navigates a mid-life crisis, a strange new dating scene, and keeping up with old friends, Wheeler faces one hell of a challenge: to square the man he is with the one he wants to become.

Casting for Linda Vista on Broadway includes Ian Barford as Wheeler. A long-time collaborator of Tracy Letts’, he originated the roles of Little Charles in August: Osage County and Ray in Mary Page Marlowe. On Broadway, he is known for The Curious Incident of the Dog in the Nighttime.

Playwright Letts is best known for the multi-award-winning August: Osage County, which was adapted into a movie starring Meryl Streep and Ewan McGregor. As an actor, he won a Tony Award for Who’s Afraid of Virginia Woolf? in 2013.

His latest work is directed by Dexter Bullard, with scenic design by Tony Award winner Todd Rosenthal (The Motherf**ker With the Hat), costume design by Lura Bauer and lighting by Marcus Doshi.

Combining playwright Letts’ keen eye for interpersonal relationships and points of transition with a stellar cast, Linda Vista at the Hayes Theater begins previews on September 19 2019, with opening night set for October 10.

Special notice: Fans of Tracy Letts’ previous playwrighting efforts should secure tickets for Linda Vista so they can judge for themselves whether this is his best work yet.

Linda Vista seat view photos show what view you will get for your money. Unfortunately we do not have any seat views for this show.